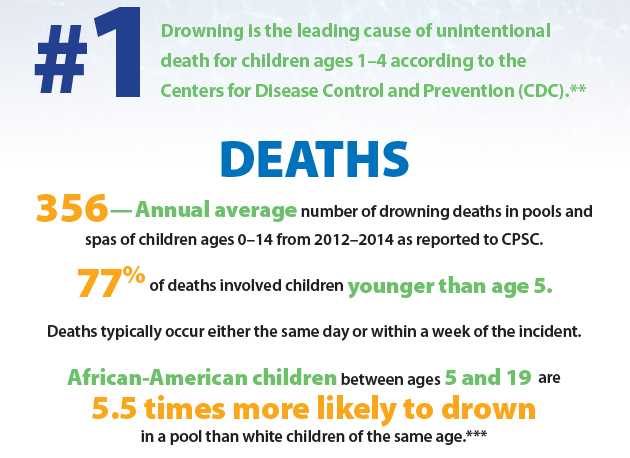 Drowning: it’s quick and silent and not at all like it’s depicted in the movies. In our new blog series, “Know the Facts,” we will evaluate the data on fatal and non-fatal drowning incidents involving children under the age of 15.* This post is the first in a series of posts that will review drowning data by state, age, location and gender of incidents.

What do we know about drowning fatalities?

Fatal child drownings in swimming pools involving children younger than 5—the most vulnerable population—have decreased 17 percent nationwide since 2010, the year Pool Safely was launched. Drowning is still the leading cause of unintentional death for children ages 1-4.**

On average, more than 350 children drown each year – and a majority of these children are younger than five. And sadly, African American children are 5.5x more likely to drown than white children.***

To combat these tragic statistics, we must work together as a community. Commit to reviewing and sharing the simple safety steps and take the Pool Safely Pledge. Together, we can stop drowning.

*Data derived from CPSC Submersion Report provides estimates and averages for reported drowning injuries and deaths. The report estimates pool and spa deaths involving children younger than 15 years of age between 2012 and 2014; for injuries for the same group, annual estimates are derived from years 2014-2016.